DigiAtlas
Digital cartography: Digitalized and vectorized maps and plans what is? 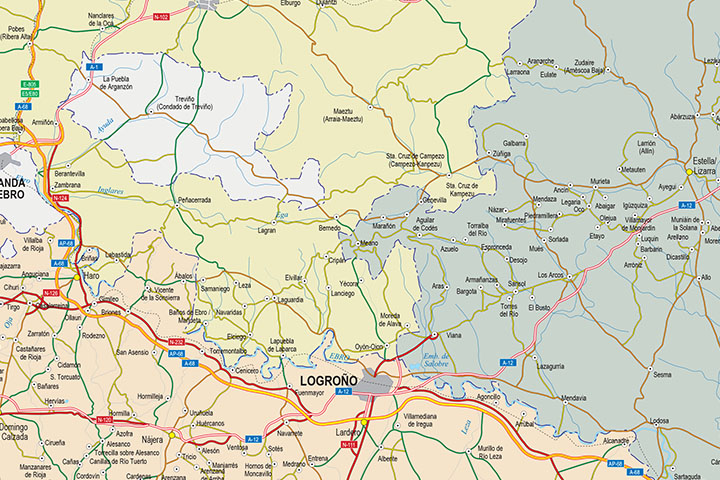 Map of the Basque Country, Navarra and La Rioja at a scale of 1: 300,000. Digital map with the provinces of the 3 autonomous communities, their municipalities, capitals, cities and towns grouped according to the number of inhabitants, network of highways, highways, national and regional highways of the first and second order, local roads, rail network, rivers and main lakes.
Map in vector format at poster size for high quality printing.
Two files are downloaded in vector format (Adobe Illustrator and Acrobat PDF) organized in separate layers to be able to edit and customize the map.

Other maps related to Euskadi »

-DOWNLOAD FREE UNTIL 15 DIGITAL MAPS through registration in 'DigiAtlas Pack', that allows you to access to our extensive digital map library with more than 600 maps and download up to 15 maps of your choice, from all those available in our map catalogue.

-Through a single subscription (one-time payment) you will be able to choose and download until 15 different thematical maps: Worldmaps, maps of continents and countries, physical and political cartography, roadmaps of spain and their autonomous communities, provinces and specific areas, postal code maps, street maps and plans, posters...

See the Whole List of the available free maps in 'DigiAtlas Pack'.

Read more about this deal »

DEALS OF THE DAY!

DigiAtlas select every day until three random maps from their catalog and intends to offer them at a very lower price than its regular cost.

These maps change every 24 hours. If either of them matches your interest take advantage of this opportunity to acquire digital maps to a very special price.